The Perpetual Astonishment of Jonathon Fairfax 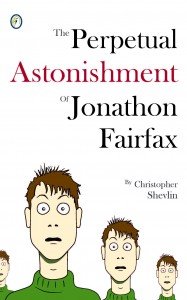 Our first book was released in August 2012. Please send distribution enquiries by email to admin at albatrosspublishing dot com, or use the contact form. Colin Midson (bookshaped.com) is handling the publicity.

‘Jonathon Fairfax was astonished. This was nothing new. His first memory of being astonished dated from the age of three, when his mother had quite casually suggested that, instead of wearing a pair of comfy watertight pants, he should spend the rest of his life holding in his wee and poo. Now, seventeen years later, he was astonished because a huge, terrifying man in a smart dark-red balaclava was asking him directions.’

The man in the balaclava is on his way to a murder. From this point on, the range of things that astonish Jonathon Fairfax rapidly expands. Soon it includes not merely his own pants but conspiracy, secret government documents (lightly buttered), a strikingly cool private detective/loss-adjustor, a low-speed car chase, a fight to the death on a very small balcony, and a woundingly beautiful girl called Rachel.

“Not many books make me laugh out loud, but The Perpetual Astonishment of Jonathon Fairfax is one of them. … It reminded me of a very English Carl Hiaasen – filled with throwaway detail, joyously funny dialogue and slightly absurd characters. … Exuberant is the word that comes to mind when describing this book. … Utterly recommended.”

Tim Moore, author of Ooh, You Are Awful (But I Like You): Travels Around Unloved Britain

“Christopher Shevlin is a comic genius. The funniest book I’ve read in ages.”

Copies are available from:

More information is available on the author’s website: christophershevlin.com